This current cool spell certainly has golfers anticipating splendid playing conditions and Monday, 9th December saw the Pattaya Links Golf Society taking the road to Pattavia to play a stableford competition in three flights, divided at fourteen and nineteen. Forty-three golfers made it to the tee on time and the starter obliged us with a two-tee start which made the organisation smoother for “Team PLGS”.

Many old friends are returning for the festive season and their loyalty was rewarded with a course in good condition with dry fairways allowing plenty of run and greens which are back to their wicked best.

Competition was tight in all three divisions with Peter Allen taking second place on countback in the third flight with Merle Humphreys third, both with 34 points. The flight winner was Arne Christensen with 36 points on his return round with the group.

The top flight found Bill Copeland, golfer of the moment, in third with 34 points, one behind Paul Smith in second with 35 Points. The flight honours went to Greg Smith whose 37 points was well deserved.

The best scores were recorded in the second flight with Ron Matthews returning 37 points for third place, edged out of second by Wayne Peppernell and his 38 points.

The winner and subsequent Green Jacket wearer was George Mueller with an excellent 39 points. The German golfer has been in fine form lately and he was due to rule the roost sometime very soon.

There were near pins for two flights on all the par threes with the winners being Livio Marrone, Les Cobban, Colm Lawlor and Kevin LaBar in the A flight, and Nigel Harrison and Keith Griffith (two) taking the honours in the B flight.

One name was on wrong flight, so missed out.

Consolation awards went to “birthday boy” Mike Firkin for his front nine score of 19 points with Mike Tottenham taking the back nine award with 21.

Part of Mike’s celebration was the sharing of a delicious cake afterwards.

The packed presentation saw Mr Phil save the blushes of Jim Ferris and Helene Lindberg by awarding the “wig’ to Scot, Ronnie Culross, on his final round after some confusion regarding hire clubs and bags, whilst Kevin McEntee was presented with the “silly hat” as it was also his final round this trip and such an award was a rare event for the amiable Irishman.

Good golf days continue with the usual PLGS friendship and good humour and, by George, some fine golf. 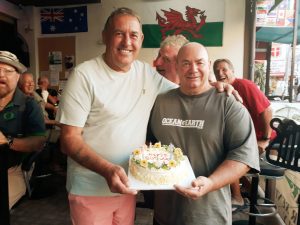