The Pattaya Links Golf Society ended the week with a Friday visit to Khao Kheow with 31 golfers anticipating an enjoyable round on another of the region’s quality courses.

The sky remained heavily overcast throughout but the rain which hovered over the nearby hills never arrived. However, it remained very humid and the soft fairways gave very little run. Greens were assessed at 9 on the stimp.

A warning to less ambulant golfers – KK had no red flags on a day when carts were restricted to paths, and with no “dual” paths there are some long walks!

Playing the C and B combination the group began on time and made good progress throughout. With the cut set at fifteen and under the second flight saw Nils-Peter Kristensen return from Denmark to post 30 points for fourth place, a couple behind Walter Baechli in third. Another solid round from Greg Proctor placed him second with 34 points leaving Adam Barton with the honour of winning the flight with 36 points.

In the top flight Toby Glass lost out on third place on countback with 34 points leaving Eric” The Judge” Black a couple behind runner-up Paul Smith on 36 points. Paul again recorded the best gross score of the day, 75 shots.

The winner, as on Monday, was Dave Hewson and his splendid golf gave him 38 points and the Green Jacket for a second time this week.

Near-pins were won by Colin Service (C3), Adam Barton (B8) and Paul Durkan (C8 and B3). The consolation best nines went to Steve Jones (18 points on the front) and Chris Barker (18 points on the back, beating John Anderson on countback).

As usual Mr Phil had fun teasing golfers with the “silly hat” and “wig’, firstly confusing Geoff Wallace by having him wear the “wig” when he had a respectable score, but it was only a joke on him as is going home, but it was Paul Chesney who thoroughly deserved the “wig’ after failing to reach double figures on either nine.

Wally Gets The “wig”  for brief a minute 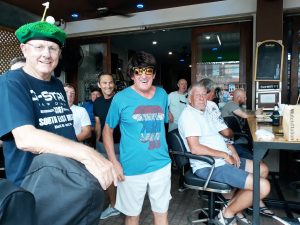 Sometimes people whisper in Phil’s ear advising him of who should wear the “silly hat”, so as to get at a mate. Phil turned the tables on the whisperer and gave “The Judge” the hat.

Some after game fun and hi-jinx at Links.

Khao Kheow is always a fine golfing challenge and again it did not disappoint.