Two Green Jackets on One Day

It was a fine and warm Monday morning as players gathered at Links Bar for breakfast and to witness the draw for playing order.

An orderly and quick boarding of the three buses, with no latecomers, yippee, and we were away on time.

Khao Kheow was in great condition when we were there two weeks ago and everything is still as good as then.

The renovation of the tee boxes is still advancing slowly but time and water should fix them soon.

Thirty two players out today to vie for two flights and the novelties.

Brendon McGovern arrived back for his first game this trip and, it seems, didn’t need a warm up as he took first place in “A” flight with 35 points off his very low handicap of +2. You work out the gross.

Bill Copeland had a hiccup a couple days ago but is right back on top, also scoring 35 points, only losing to Brendon on countback.

Simon Kendall is always thereabouts and took third place by winning a countback over a back to form Phil Davies, both scoring 34 points.

Larry Slattery’s name has been called a couple of times recently and this time it was for being the winner of “B” flight with 35 points.

John Coetzee had a good day out and put together 33 points for second spot ahead of Tip Briney, who had a mini revival, on 31 points

Dave Arataki rounded out the podium with 31 points for fourth also on a countback.

Somebody was settled into the bus for the trip back when he was recalled to the Clubhouse and asked to pay his bin. A top contender for the “silly hat” for sure, but he had scampered before presentation time. It will wait for him. 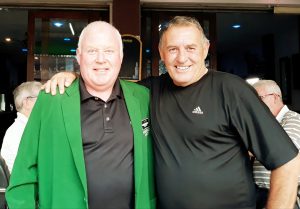 Brendon and  Larry with Phil 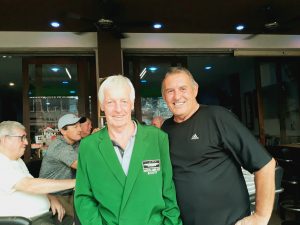 So, with that, Phil decided to leave the “wig” in the bag and, instead, award not one, but two Green Jackets.

First Brendon McGovern and then Larry Slattery, who both had 35 points, wore the Jacket for the photo op.

Plenty of players are looking forward to returning to KK in about two weeks.