It’s Christmas Day in Pattaya, Thailand, and it’s time for some golf.

Thirty two Links Golf players arrived at Eastern Star clutching 850 bht green fee vouchers and headed for the first tee where the starter told us to start when ready. She did insert a three-ball behind our first group, by agreement. After four holes, our group called them through and then had an easy run to finish in good time.

The weather was hot with an intermittent breeze, but the interesting thing was the large black cloud looming all day. A few spots of moisture was all it would produce and that, for our last group on the last green.

It was decided to have an easy day and play from the forward yellow tees, hence the quite high scoring average of about 33 points.  Plenty of run on the dry fairways and some nice greens helped also.

The ‘A’ flight saw Irishman, John Doyle, playing off a nine handicap, where he had one of his better games to score 39 points and the win.

George Mueller is a good golfer and is going through a purple patch, and was once again in the placings, scoring 37 points to be third on a countback over an unlucky Dave Robinson.

Richard Pope was close to the bottom of the ladder in his first game with us, but it must have been a warm up as today he shined, scoring a great 40 points to win ‘B’ flight and his first Green Jacket.

Bill Stewart is often around the top end of the bunch and took second spot with 39 points but had to hold out Darren Beavers on a countback.

Presentations were done early, then an added extra for this Xmas Day.

A ‘mystery partner’ draw with a nice prize for the winning pair.

The scorecards are shuffled and thrown in a bag. Phil would draw one card and then the next out was the mystery partner. The scores were added together for a pair’s total.

A lot of fun was had as many scores were close, some not so..

In the end it was a tied score with two pairs having 74 points.

Phil decided to have a tie breaker, but then quickly, he personally added to the pot to give both pairs the first prize. 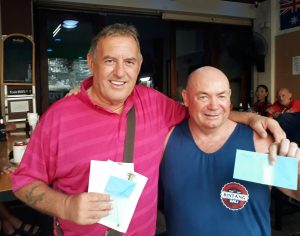 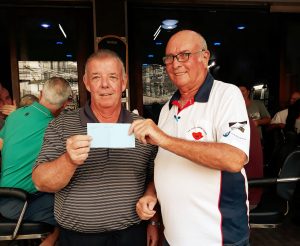 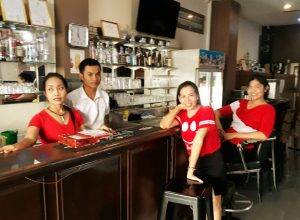 Soup was ready and then came the sumptuous Links Xmas Day Buffet together with some mood music to round up a ‘Wonderful Christmas Day’.

A big Thank You to Maurice, Joy and Moon, for serving us another fantastic Xmas Dinner, and to the staff, Ladies and Lads, for keeping up the pace of serving the drinks, and cleaning up after us.