Green for Griffith but Ace for Smith

With the days warming up so are the golfers with the Pattaya Links Golf Society, as eight groups visited Pleasant Valley on Monday for a stableford competition in two flights with the cut set at sixteen and under.

The busy course was well presented with grassed fairways allowing “run” and greens a little quicker than normal here. The Greenkeeper had obviously had a bad night and he took revenge with some tough pin placings, many on slopes, or at the top of slopes and tucked behind bunkers. Haway man, it’s a Monday!

Welcoming back some old friends, the group got away on time and both flights remained competitive in the fresh breeze.

In the second flight third place went to Darren Beavers with 34 points, with lady golfer Helene Lindberg making her mark again with a second place finish on 35. The flight winner and Green Jacket wearer was Keith Griffith with 41 very sound points.

The highlight of the day, however, was Colin Smith’s “ace” on the island hole, number eight. His majestic six iron unerringly ducked into the hole to give him his fourth personal hole-in-one and the fifth for PLGS this year.

At the nether end of the final table was the ret

urning Iain Jones and his low score took the “wig’ whilst Michael Lindberg’s dismal back nine gave him his first “silly hat” since his return last week. 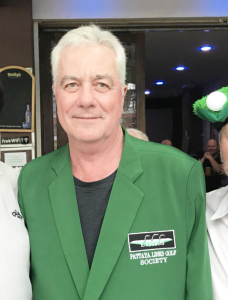 The presentation ended with the time honoured tradition of the hole-in-one winner buying drinks all round on another memorable day for the Pattaya Links Golf Society.