The spattering of rain on the windscreen became very heavy as we unloaded ourselves and bags from the buses at Pattana. It did not look promising for a 10.00 am start.

Once inside, players were milling around as there was some debate over the price we were told and the price Pattana wanted us to pay.

Phil negotiated with a Manager who then took the matter higher. There were now thirty three players and thirty three caddies not knowing if we were to stay or to go elsewhere. Common ground was found and we paid the price we expected.

Perhaps a plus from the time wasting was that the rain had now stopped and play got under way quickly, just 10 minutes after our scheduled time. Although overcast and very windy all day, our round was completed without another drop of rain on the course.

Our first two three-balls played the front nine in good time, then at the tenth (B1) a five-ball had been inserted in front of us. To be fair, they did move along very well and our first two groups completed the round in a tad under four hours.

The number of players meant we were able to have two flights and the novelties.

The “B” flight saw Big Adam Barton return to the winner’s list with a great 40 points.

Last week’s winner, Stuart Kidd, held that form to take second place with 38 points ahead of last week’s “wig” wearer, Ray Byron on 37 points. A week is a long time.

Merle Humphreys, in his final game this trip, took fourth spot with 36 points.

The “A” flight produced the star of the day as Derek Phillips was the tearaway winner with a very large haul of 43 points. Sometime cellar dweller, Derek, had one of those days we all wish for.

As usual, Paul Smith figured in the placings, this time taking second place with 37 points to once again have best gross of 75.

Bill Copeland and Paul Kennedy, both on 34 points, went to a countback for third with Bill  having the better back nine.

It was Club Captain Wayne Peppernell’s birthday and Joy presented him with a cake complete with candles. This cake ended up in much better condition than the one his Ex got for him. Following a “ misunderstanding” that cake took on an entirely different shape.

Phil told the story in more detail and it was enough for Wayne to wear the “silly hat”. 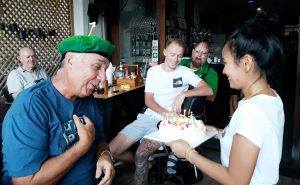 The very good scores today show up the excellent condition of this course. But that seems to be usual here and we do appreciate that.