When a top of the range International Golf Course, designed by the great Jack Nicklaus, is making an offer of half price why would you not go there at least twice a month?

Links Golf is doing just that and many players are jumping at the chance, so today we had thirty nine names on the sign-up sheet.

The weather has changed so much in the past few days we have almost forgotten how depressingly hot it has been. This morning as we assembled at Links Bar we had grey sky with a fine drizzle of moisture, quite pleasant and, with everyone here, buses left early again.

Check-in is easy and off to start on the C1 tee. Our first group, a three-ball teed off ten minutes before our scheduled time and made good speed throughout.

This course is always immaculate and, although the regular maintenance of the greens had been done recently, they had settled nicely with just a smidgen of sand still visible.

There had been some overnight rain so the fairways were damp and it was decided to play lift, clean and place, which was a good choice as there were some plugged or muddy balls at times.

Marco Beer was in the first group who, as Marco described it, were nearly running and completed the course in about 3 hours 15 minutes. This, however, did not affect his game as he has come in with a great score of 43 points to easily win the “B” flight.

Darren Beavers and Colin Service have both had form slumps for a while, but both came roaring back today with Darren recording 40 points for second place and Colin had 35 points for third.

Les Cobban lamented that his 38 points, a good effort off a 6 handicap, could only get him third place in the “A” flight, being beaten by his two playing partners Jamie Booterbaugh scoring 39 and Lee Rodman making 40 points for the win.

Near Pins: For the first time in memory all four pins failed to return to the Bar. There will be double the near pin prizes next game. 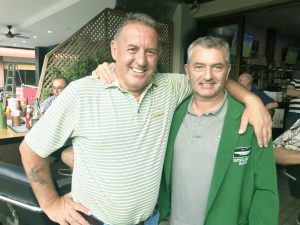 The last group did as requested and picked up the near pin markers, but rather than hand them to the organisers gave them to a bus driver. Thinking “ why is this crazy Farang giving me four bits of paper stuck to a stick?” Probably rubbish, so throw them in a bin.

We’ll never know, but it was worth two “silly hats”, so compatriots Kevin LaBar and Paul Lanzetta were presented with new headwear.

On a sour note: Of the 39 who signed up there were two last minute cancellations, who did call and four no-shows. In these days of many forms of communications how hard is it to make a call to tell organisers if cancelling?

It means trying to re-shuffle players while on the tee, not good for anyone.