Phil’s Birthday Bash- What a Party!

This course is in terrific condition, considering the lack of water available, as many courses  are drying out now.

As we started to assemble at the first tee, the starter was pushing us to get the groups going early as he had to fit in a three-ball. Fairly soon he calmed down after deciding to start them from the tenth.
We got our 19 groups away in a little less than two hours and, with no hold ups, all finished in good time, the first group came in under four hours.

Plenty of presents available on such a big day with three flights and loads of novelty prizes.

Phil Ashton, playing his second game since arriving from UK, took out the ‘A’ flight with a solid 37 points.

Then came three players on 36 points which needed the countback to sort them. Andrew Kelleher maintained his very consistent game to run in to second place followed by Chris Paterson in third and Joe Nagle in fourth.

Steve Moxey took fifth spot with 35 points which came after many countbacks at that mark.

The ‘B’ flight results were a mirror image of the ‘A’ flight.

Adam Barton, showing good form this trip won the flight with 37 points. Then followed another three way tie on 36 points which, again, went to countback.

Ann Stokes, one of only two ladies in the field, took second spot followed by the now consistent Chas Miller while Billy Buchanan grabbed the fourth place.

The ‘C’ flight produced the three top scores of the day.

The best of them all came from Mike Firkin who, only a few hours earlier, stepped off a plane after a quick trip to Australia. His great score of 40 points won him the flight and the Green Jacket.

John Hughes came in second, declaring that his 39 points was his best ever in Thailand, well done.

Keith Melbourne is a high handicapper but is able to pull one out of the bag sometimes and this day it was a big 38 points, but only third place.

Dave Rodriques, in a very rare appearance, surprised himself and his buddies in the group by scoring 36 points and taking fourth spot on countback over Chris Walsh.

Now the winners of the novelties.

It was still daylight as we arrived back at Links Bar and ready to party.

The formalities of the presentations for all the winners was done while the food was being prepared.

Then it was out to the pig on a spit and chicken on a spit plus loads of salad and fried rice, enough to feed an army.

Inside, we had some mood music by a local Thai duo while everyone was eating and re-living their round of golf.

Then the show started, and what a show as the great talents of the duo inspired some of our farang talent to join them on stage.

We know Phil can belt out the Tom Jones classics but tonight, as we had many Irish golfers, he gave them some renditions of some Irish songs. Garry Barker, Nick Shaw and Terry Archer and one or two others all did a few numbers covering various genres, all in professional style.

The place was rocking as the audience joined in the chorus lines, and even a conga line formed as the dancing and music became more exciting.

Joy bought out the birthday cake, then some much appreciated donations from Jon Dean and Tommy Marshall became prizes in a lucky draw. Well actually, many lucky draws.

A great night where people stayed on much later than ever before having a party to celebrate Phil’s Happy Birthday. 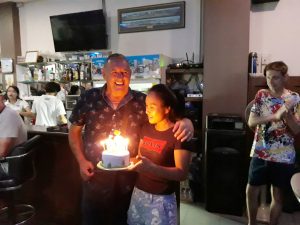 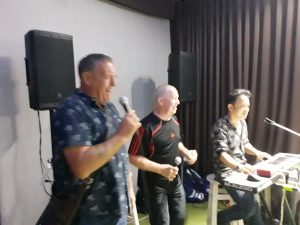 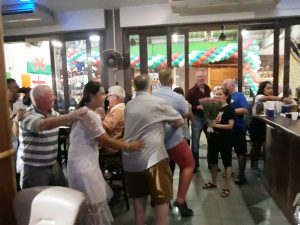