Ian Mollard loved coming to Pattaya and playing golf at Links. Back home in the UK he contracted Leukemia and sadly passed away a couple of months ago.

He gave his great mate, Pat Lavin, some money and requested he bring it to Links and that it be spent on giving the players a big and happy day of golf.

Thanks to Ian’ generosity, we were able to increase the size and number of prizes.

Forty one players came out to Green Valley for this day and vied for four placings in two flights plus double the number of near pins and one long putt, along with the usual best nines.

Kevin McEntee was passenger in Derek’s car which became lost en route only to arrive well after everyone had teed off. However, his great power of concentration, no panic, and plenty of golf talent saw him score 42 points to win the “A” flight.

Wayne Peppernell had one of his better days and made 37 points for second spot.

Then Phil Davies scored 36 points and had a better back nine to win a countback for third over Ciaran Smyth.

The scoring in “B” flight was just crazy. With a sky high score of 45 points it was first placing to Dave Orbinski, and the Green Jacket, just before heading home to Aust.

Niall Caven played in the same group and it must have rubbed off as he took second place with 43 points on countback over the third member of that three-ball, Brian Bissett.

Ron Matthews wasn’t in that group but scored 37 points to grab fourth.

After arriving back to Links, Phil conducted the presentation of prizes as usual, but then more surprises. All cards were shuffled and lucky draws took place with prizes ranging from sleeves of Titleist ProV1 and ProV1x golf balls, a new Chee Chan golf bag, won by Mike Firkin, and a New Callaway Rouge Driver, won by Dave Arataki.

Many happy winners there.

Then the trays of seafood salad and potato salad arrived to compliment the 2 pigs-on-a-spit, followed by music from a talented local duo and, just for good measure, a couple of numbers from Phil Davies (a la Tom Jones) and David Wilkinson.(a la Frank Sinatra) 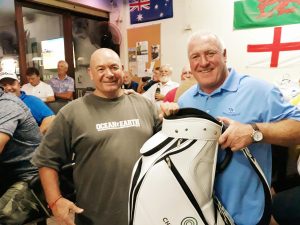 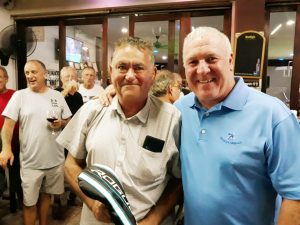 A great day and night for all, which we feel sure fulfilled Ian’s wish.