The Count Lords it at Riverside…Just!

At this time of the year the course at Bangpakong Riverside is a joy to play. Always well prepared, the fairways are well grassed and the greens are excellent, running at pace. In addition, there is generally a refreshing breeze evident on the banks of the Bangpakong River. This was the scenario for the latest large PLGS group which visited on Monday 20th January.

The forty-nine golfers were divided into three flights (0-14, 15-19 and twenty plus) and got underway on time ushered by a fastidious starter.

The course has a name for good scores and today almost 1,600 stableford points would be amassed by the golfers.

In the third flight Niall Caven returned to the podium with a third placed 38 points, leaving John Masters and Simon Watts to share the lead with 40 points, which John Masters won on countback.

In the top flight Rana Gurnam, still smarting from his “silly hat” award last week, returned 38 points for third place with Belgium’s Patrick Engels pipping him for second on countback. The winner of the top flight was Mike Ehlert whose round was full of skill and accuracy as he returned 42 points for a splendid victory.

The second flight saw some of the highlights of the day with Colm Lawlor taking third with 36 points. A country mile ahead were Bill Buchanan and “The Count”, John Malet de Carteret, with 43 points each. John’s back nine proved better than Scotsman Bill’s and so he took the Green Jacket with a broad smile at the presentation.

Of the many candidates for the “silly hat” Mr. Phil made special mention of Niall Caven’s efforts on the first hole where a poor drive left him more than 300 yards from the green. Despite his faith in his swing he resisted all attempts and abuse from the tee behind him to play.

When he did commit himself he was still woefully short and rightly deserved the award for holding a large field up for five minutes or more, unnecessarily.

The ‘wig’ was less complicated with a thoroughly deserved award made to Carl Lovatt for his low score of the day. 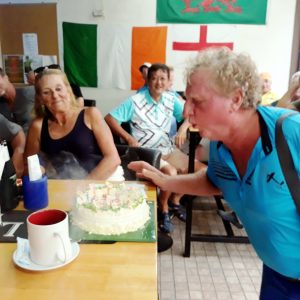 An excellent golf day ended with a rousing rendition of “Happy Birthday” to Mr. Maurice, and the cake, as well as the golf, was very tasty indeed.