Quality Course at a Special Price

After the heavy rains experienced in Pattaya and at Pattana, overnight and early morning, it was no surprise to find that carts were restricted to paths only.

This course is a favourite of many because it is almost always presented in top condition and with some great views, if you take the time to look around. The fairways today were well grassed, looking picturesque and, as expected, a little soft underfoot. The greens were a little fluffy and slower than usual, but running truly. Tomorrow’s trim will fix that.

Pattana is again running the super special price of 1350 bht all-in for a start after 11.30 am.

Our first four-ball teed off pretty much at the scheduled time and had an open paddock in front of them, enabling a clear run for the round to finish just on the four hours. It does take a little longer when carts don’t drive on the fairways. Unlike recent courses we have played, today we were not alone however, while we started from B1, others were teeing off from A1, so we never met.

Since returning to golf we have found each course following the guidelines/instructions for the check-in procedures re the virus, and each one has their own method.

Pattana has a system which is much more rigorous than some others, with the usual temperature taking and information, passport, phone number etc. but also having the caddies spraying carts at the half way stop. The staff all play their part and play goes on.

Since our visit earlier in the month, lockers and showers have now re opened for use.

Even though we are not playing competition at the moment, Lawrie McBride has had his fourth excellent score in a row, although this one, at 35 points, was his lowest of the four. . And the good news he was waiting for!  His handicap has come down by 2 shots. Well done Lawrie.

We will return here next Friday, June 5.

In the mean time we will go to Laem Chabang on Monday, June 1 to make use of our rain check vouchers so, please get your name on the sign-up sheet at Links Bar or use the Online sign-up. 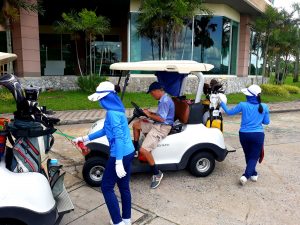 Caddies spray the carts at the half way point.