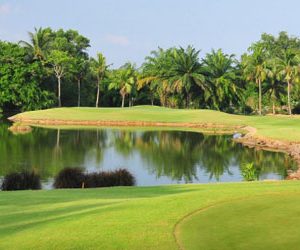 Some “Links” regulars decided that they needed to spend a lot of money, so headed for just about the most expensive golf course around.

Others had rushed to play a lot of golf after the lockdown and now needed a break so today, very unlike Links Golf, we had just 10 players head to Green Valley, almost the smallest number we can remember in three plus years.

The weather changed throughout the day from hot and still to, at times, a nice breeze which gave some comfort.

The course is in good condition, although we may have been ahead of the mowers. The greens ran truly, if a little slower than we normally expect here.

Not many players but some good scores handed in. Lawrie Mc Bride, for the third game in a row had the best score, this time 38 points. Gerry Hanrahan and Ian Pickles each played to handicap with 36 points each, and Phil Davies had 35 points.

The ongoing roadworks catch out drivers with changing U turns and lanes to use in order to get to the course. Our bus driver said that he had checked the night before, but still took a wrong lane and needed to find a way back to the road.

He was not alone, as Donal McGuigan was running late, because of the fact that we had been given the go ahead to start thirty minutes early and, with each phone call, he said he would be 5 minutes. Our final group played on and then Donal, playing alone, caught up at the par three eighth to complete the four ball.

The check-in procedures here are simple and easy, unless you are a first time user of the Q Code. The number of clicks and confirms to do, I think it will be easier to just use a pen , the old fashioned way.

We were not the only Society out here today and, even though locker rooms and showers are back to normal, we still managed to arrive back at Links very early afternoon.