Miss On – Can Caddie and Play Golf

The course was in the usual very good condition and ‘those’ greens are still as tame as we left them a couple of weeks back. Don’t be fooled though, there is still two putt back with a miss on the downhill.

Kevin LaBar and his Caddie from Laem Chabang, On Phisetrit, get to have a game of golf together occasionally and today turned out to be an exceptional day for both.

Miss On, who plays off a handicap of #16 started slowly, with a one point, then a no point ‘blob’, but the next was two points and away she went. By the end of the round she had put together 38 points to beat the ‘boys’. She would have worn the Green Jacket except that she had to run away to play another 18 holes on another course. Does she like a game of golf?

Kevin was, of course, in the same group and at the par 3 fourth scored his second ever hole-in-one.

He admitted that the stroke wasn’t what was intended. A nine iron was supposed to go to the back of the green, but a very ‘thin’ hit had it going like a missile down low, hit something solid on the green, and rolled back to the hole. Doesn’t matter how you get them Kev.

Billy Buchanan kept up his form after a rest to score 37 points to take second spot ahead of a solid show from Tony Browne on 36 points.

Paul Durkan was again in the mix to grab fourth place with 33 points from his handicap of #4.

The assorted gifts from Pattavia Century for the hole-in-one included a plaque and certificate, a voucher to pay just 200 bht green fee for one year and, being a Chang course, a Tower of Chang beer.

roblem here was that this came out as the bus was in the loading area with all but one passenger on board, Kevin.

We held the bus for a few minutes during which time Kevin made a valiant attempt at the lowering the tide of the Tower.

A happy man nevertheless and did not fail to ‘ring the bell’ back at Links.

A surprise heavy rain shower swept across the course late in the round, catching all but the first group. That group watched from the clubhouse as the next three groups, including the winner, On, kept playing and were drenched, but undeterred. A job well done. 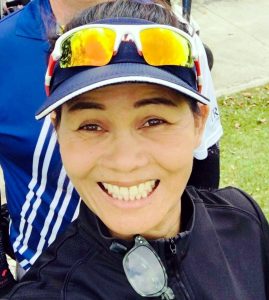