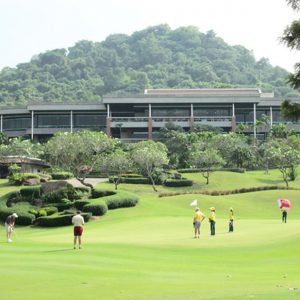 Only days ago, Tip Briney, while he was on a roll, handed in a score of 43 points.

Well, here is another 43 points, this time from Craig Webster.

Craig plays with a couple of Societies and has been posting some okay to good scores, but this one has been waiting to be let loose and what better place to do it than beautiful Laem Chabang.

He had a big day, as he also picked up two near pins to add to the tally.

This course never fails to impress and, once again, all aspects of the course were just about perfect. We played lift, clean and place, but it was hardly necessary as the fairways are smooth and with good run.

The dark clouds that seem to be hanging about were present all day, and even managed a one minute sprinkle of rain during the first nine.

Near the end of the round, though, the heavens became noisy as thunder rolled and some lightning flashes were spotted. It then became touch and go if all groups would make it in before the rain came.

Good news! they did, and we saw no rain except for a few spots on the windscreen during the drive home.

Steve Moxey had a one shot increase in his handicap this week and took advantage by scoring 36 points to take second place behind Craig.

Then came another three-way tie on 35 points, with Darren Beavers just edging out Paul Durkan for third spot. Paul, in turn, took fourth place ahead of Walter Baechli.

It seems like plenty of our Links golfers enjoy playing this course, so will be back for another nice day out on this top course in two weeks from now, July 27. Don’t miss it.