On a day where the attrition rate was high for various reasons, e.g Rain, impatience, ‘thought the others were stopping’ and score no good, we started with twelve players and ended with eight scores handed in.
Pattavia Golf course was in the usual good condition we have become used to, with nice fairways, the rough a bit trying and those greens.
There has been rain here and even some more during the round that caused a twenty minute delay. This has slowed the greens to a playable speed, although one of the retirees, being a relative newcomer to the course, reckoned they were too quick.
At the rain delay, Moxey came running to the clubhouse all excited and said he is playing on. Having many failures at this course and saying he would never come here again, now had 17 points for eight holes and feeling confident.
Playing on was a good decision because he kept his head down and came out on top with a score of 37 points, a very good score on a difficult and wet day.
Kevin LaBar, playing at his ‘home course’ had another fine game here with 36 points for second. A 200 bht green fee for a year, as part of a prize for a hole-in-one, gets him on to this track as much as he can.
Wayne Peppernell didn’t bother to ask if he was in the prizes, but he was, even though only having 30 points.
𝗪𝗶𝗻𝗻𝗲𝗿𝘀 𝗮𝘁 𝗣𝗮𝘁𝘁𝗮𝘃𝗶𝗮
1st Place – Steve Moxey (11 ) – 37 pts
2nd Place – Kevin LaBar (12) – 36 pts
3rd Place – Wayne Peppernell (14) – 30 pts
𝗕𝗲𝘀𝘁 𝗙𝗿𝗼𝗻𝘁 𝗡𝗶𝗻𝗲 ( non winners) – Mike Firkin – 17 pts c/back
𝗕𝗲𝘀𝘁 𝗕𝗮𝗰𝗸 𝗡𝗶𝗻𝗲 (non winners) – George Mueller – 16 pts c/back
After dodging the rain at our past few games, we lucked out today. This caused only a short delay and didn’t do any harm to the course.
However, there was rain, hard and plenty of it, all the way back to Pattaya and then some more just after arriving at Links. Did someone say a couple of weeks ago that the rainy season had ended?
Today it was Farewell to Joy, Links popular bar manager, as she heads to Wales to join Phil. We have no idea when she and Phil (or any of our clan stuck overseas, for that matter) will be getting back to Pattaya, sooner the better, though. 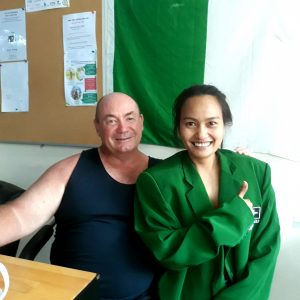