The weather forecast was for heavy rain in most of Chonburi and at 7.30 am this day we got it and more. There were two early arrivals at Links and together, as the rain became heavier, we wondered how many would want to cancel.

In the meantime, we phoned Pattavia to ask if they had rain. We were told ‘no rain now’, and so, at the scheduled departure time, everyone had arrived and took the chance.

En route to Pattavia, the sky looked anything but promising and light rain continued.

Upon entering the golf course gates, it stopped raining and stayed that way until all of our six groups had teed off.

It did drizzle for most of the round however, but all of our hardy golfers completed the 18 holes, the lead group, a three ball, finished in just three hours.

The course is in terrific condition with well grassed fairways and greens running true but, because they were a little wet, slowed just enough to make them manageable.

Golf journeyman, Kevin LaBar, is pretty consistent and today, with a big score of 40 points, won the Green Jacket, all dry cleaned and having it’s first outing since the lock down. Kev has grown a bit since last he wore it, but still made it fit.

Tommy Marshall is currently a #5 handicap and playing like that. He has had some really good scores in the past few weeks, most of them grossing in the 70’s.  Today’s 36 points got him second place.

John Harrison doesn’t play with us a lot, but when he does, is usually somewhere in the mix and today he was third with 35 points, getting the nod on a three way countback.

One ‘near pin’ was left out in the elements and another had the plastic left off and drowned but, we managed to sort out some winners.

At the first competition game after the enforced break things went smoothly enough but, near the end of day, there were a few hiccups, shall we say. There was some good fodder for the ‘silly hat’, but we will keep that in waiting for the next round.

Congratulations and thanks to everyone for defying the weather, and coming out to play at a beautiful golf course. 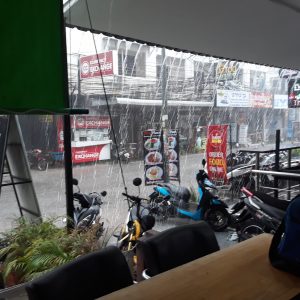 The Rain Came Down in Buckets at 7.30 am