After being closed for some months and a reported new owner we booked in to Silky Oak to have a look at how the course had been upgraded and changed.
Certainly, the greens, which had never been in good condition, were now dug up and re-sowed with a different grass to look and play beautifully.
A new par 3 has replaced the little 80 yard one and the holes have been re- numbered so that what was number 11 is now number 1, and the former number 1 is now number 10 etc.
Disappointingly, the rest of the course, fairways and rough, look the same as before. The tee boxes, also. are fairly messy. However, let’s be fair and give it some time to see what happens.
Given all that, there were some players who handled conditions very well.
Mr. Consistent, Petur Petursson, who has extended his visa, was once again leading the way with a great score of 39 points from his, still, #8 handicap.
Getting better with each game, our Korean buddy, Young Min Ko, ran up 39 points himself to just miss top spot on a countback.
Mark On, in a rare, but welcome appearance, produced the game we know he is capable of, so a score of 38 points got him third place.
Speaking of consistency, Francis Goyons is always listed somewhere in the placings and here he is fourth with 36 points.
Travellin’ Man, John Chelo, also scored 36 points to finish in fifth spot, just behind Francis on a countback.
Stuart Kidd has had a couple of ‘shockers’ recently, but put it together today for a solid 35 points for the final spot on the podium.
𝗡𝗲𝗮𝗿 𝗣𝗶𝗻𝘀: Dave Arataki (6), Adam Davies (8), John Reps (12), Paul Summerfield (14)
𝐖𝐢𝐧𝐧𝐞𝐫𝐬 𝐚𝐭 𝐒𝐢𝐥𝐤𝐲 𝐎𝐚𝐤
𝟭𝘀𝘁 𝗣𝗹𝗮𝗰𝗲 – 𝗣𝗲𝘁𝘂𝗿 𝗣𝗲𝘁𝘂𝗿𝘀𝘀𝗼𝗻 (𝟴) – 𝟯𝟵 𝗽𝘁𝘀 𝗰/𝗯𝗮𝗰𝗸
2nd Place – Young Min Ko (28) – 39 pts
3rd Place – Mark On (9) – 38 pts
4th Place – Francis Goyons (14) – 36 pts c/back
5th Place – John Chelo (21) – 36 pts
6th Place – Stuart Kidd (15) – 35 pts
𝗕𝗲𝘀𝘁 𝗙𝗿𝗼𝗻𝘁 𝗡𝗶𝗻𝗲 ( non winners) – Nick Crossan – 20 pts
𝗕𝗲𝘀𝘁 𝗕𝗮𝗰𝗸 𝗡𝗶𝗻𝗲 ( non winners) – Steve Baker – 19 pts
As we waited at the first tee, a five ball was followed by a two ball? And then another Pattaya Society had two four ball’s, all ahead of our 6 groups. Surprisingly, and thankfully, there were no hold-ups and the round was completed in a tick over four hours.
𝑯𝒂𝒑𝒑𝒚 𝑵𝒆𝒘 𝒀𝒆𝒂𝒓 to all of our golfers, wherever you are in the world. Hope to see you soon! 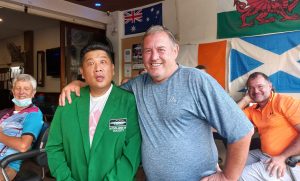 Petur skipped off before the photo, so Phil thought it a good idea to have Young Min wear the Green Jacket.
𝑷𝒉𝒐𝒕𝒐: The different faces of 𝐘𝐨𝐮𝐧𝐠 𝐌𝐢𝐧 𝐊𝐨, happy guy.