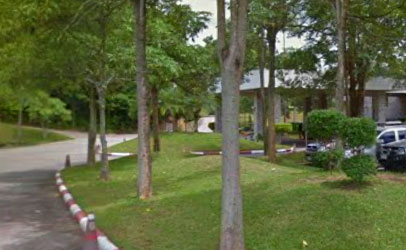 Playing at Treasure Hill seems to be a problem for many golfers and it doesn’t get any easier, even though the course is in very good condition.
Twenty three players came out today and seventeen of them struggled to get to thirty points total. It’s a mind game for many!!
On this day the weather was very comfortable with a light breeze and not too hot.
Unlike some courses, there is still enough green grass on the fairways to hit from, but some rain will be needed soon.
The greens are in top class condition and playing truly, albeit some of the pin placements were a bit ‘nasty’.
Pierre Zbinden has been playing at Green Valley mostly as he is a member there, but paid us a rare visit for this round, and good to see him again.
Pierre played a steady, if unspectacular game, and put together two even nines of 18 points for his winning total of 36 points.
As usual, Petur Petursson was right at the top of the ladder and, with 33 points, took second spot.
Francis Goyons missed out on a Green Jacket this time, but had a handy score of 32 points for the third place.
Mike Firkin had another steady round of 31 points for fourth spot and the player once known as ‘the Treasure Hill Specialist’,𝑱𝒐𝒉𝒏 𝑨𝒏𝒅𝒆𝒓𝒔𝒐𝒏, won a countback to grab fifth place with 30 points.
𝗡𝗲𝗮𝗿 𝗣𝗶𝗻𝘀: Vito Cirelli (2), Billy Buchanan (6), Mike Firkin (13), Young Min Ko (17)
𝐖𝐢𝐧𝐧𝐞𝐫𝐬 𝐚𝐭 𝐓𝐫𝐞𝐚𝐬𝐮𝐫𝐞 𝐇𝐢𝐥𝐥
𝟭𝘀𝘁 𝗣𝗹𝗮𝗰𝗲 – 𝗣𝗶𝗲𝗿𝗿𝗲 𝗭𝗯𝗶𝗻𝗱𝗲𝗻 (𝟮𝟭) – 𝟯𝟲 𝗽𝘁𝘀
2nd Place – Petur Petursson (8) – 33 pts
3rd Place – Francis Goyons (14) – 32 pts
4th Place – -Mike Firkin (19) – 31 pts
5th Place – John Anderson (30) – 30 pts c/back
𝗕𝗲𝘀𝘁 𝗙𝗿𝗼𝗻𝘁 𝗡𝗶𝗻𝗲 ( non winners) – Phil Davies – 15 pts c/back
𝗕𝗲𝘀𝘁 𝗕𝗮𝗰𝗸 𝗡𝗶𝗻𝗲 ( non winners) – George Mueller – 17 pts
Young Min Ko had a terrific score of 23 points for the back nine but, as he had already won a ‘near pin’, didn’t qualify for the ‘best back nine’, much to his surprise, but that’s the way it is.
Where others have quietly had some price increases, Treasure Hill has kept the very good price of 1150 bht all-in which includes a 100 bht voucher for drinks, all excellent value.
𝗟𝗶𝗻𝗸𝘀 𝗚𝗼𝗹𝗳 𝗦𝗼𝗰𝗶𝗲𝘁𝘆 is a PSC affiliated, friendly group and welcomes golfers of all levels. We play competition golf 𝗠𝗼𝗻𝗱𝗮𝘆 ,𝗪𝗲𝗱𝗻𝗲𝘀𝗱𝗮𝘆
𝗮𝗻𝗱 𝗙𝗿𝗶𝗱𝗮𝘆.
Links Bar is towards the Southern end of Soi Buakhow.
Check the Big board out front for upcoming games schedule.
Sign up at Links Bar or online to join us for a day of golf.
www.thelinkshotelpattaya.com
𝑷𝒉𝒐𝒕𝒐: Pierre couldn’t get back to Links and we don’t have a photo.
Here is a view from a couple of years ago. Spot the Santa Hat.