Do you dream of the great things you will do on the golf course for your round next day, only to come crashing back to reality when the usual mistakes and missed 3 ft putts happen as usual?
If Simon Niven had that happy dream, then it became a dream come true.
Simon made his first ever Hole-in-One on the Par 3, B7 for an eagle and, yet another eagle on the Par 6, A5. Those great scores contributed to a total of 39 points to win ‘A’ flight and the overall win, for another Green Jacket.
John Reps has shown that he is a pretty handy golfer and has had some good scores without quite getting to the top.
Last December, however, he had a great score of 42 points which did get to the top and his first ‘Jacket’. The next one is not far off.
A very solid 37 points placed him in second place today.
Phil Ashton is currently playing with an eight handicap and won a Green Jacket a day after leaving quarantine. He has scored well once again with 36 points, which took him to third spot, beating Nigel Henson in a tight countback. Nigel settled for fourth place.
In the ‘B’ flight, John Coey, has now had a handful of games with us without making big scores but, on this day, has found his true form to take the ‘B’ flight win with 36 points.
It wasn’t all John though as Wayne Peppernell, continuing his comeback, also had 36 points, to take second place after losing the countback.
For the second successive game. Young Min Ko scored 36 points, and that after losing a shot from his handicap. That got him third place.
Billy Buchanan has also lost a couple of shots, but has now scored 41 points, then 35 points, and now another 35 points to grab fourth spot. That is consistent play.
𝑵𝒆𝒂𝒓 𝑷𝒊𝒏𝒔: Simon Niven collects all near pin prizes for his hole-in-one
𝐖𝐢𝐧𝐧𝐞𝐫𝐬 𝐚𝐭 𝐏𝐚𝐭𝐭𝐚𝐧𝐚…..𝐀. 𝐅𝐥𝐢𝐠𝐡𝐭…(𝟎-𝟏𝟓)
𝟭𝘀𝘁 𝗣𝗹𝗮𝗰𝗲 – 𝗦𝗶𝗺𝗼𝗻 𝗡𝗶𝘃𝗲𝗻 (𝟭𝟮) – 𝟯𝟵 𝗽𝘁𝘀
2nd Place – John Reps (13) – 37 pts
3rd Place – Phil Ashton (8.) – 36 pts c/back
4th Place – Nigel Henson (12) – 36 pts
𝐖𝐢𝐧𝐧𝐞𝐫𝐬 𝐚𝐭 𝐏𝐚𝐭𝐭𝐚𝐧𝐚…..𝐁. 𝐅𝐥𝐢𝐠𝐡𝐭…(𝟏𝟔+)
𝟭𝘀𝘁 𝗣𝗹𝗮𝗰𝗲 – 𝗝𝗼𝗵𝗻 𝗖𝗼𝗲𝘆 (𝟭𝟴) – 𝟯𝟲 𝗽𝘁𝘀 𝗰/𝗯𝗮𝗰𝗸
2nd Place – Wayne Peppernell (19) – 36 pts c/back
3rd Place – Young Min Ko (23) – 36 pts
4th Place – Billy Buchanan (16) – 35 pts
𝘽𝙚𝙨𝙩 𝙁𝙧𝙤𝙣𝙩 𝙉𝙞𝙣𝙚 ( non winners) – Peter Kelly– 20 pts
𝘽𝙚𝙨𝙩 𝘽𝙖𝙘𝙠 𝙉𝙞𝙣𝙚 ( non winners) – Toby Glass – 19 pts c/back
Although the course was quite busy, thankfully for the club, we were granted a two tee start once again, always appreciated.
The weather was threatening rain for most of the round, but nothing came of it and everyone stayed dry.
Now, we don’t confess to knowing exactly what Simon dreams about, and we would rather not ask, but in a fantasy world, dreams do come true. 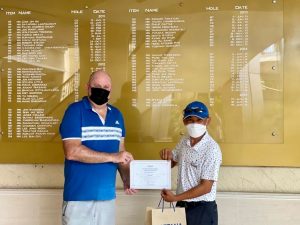